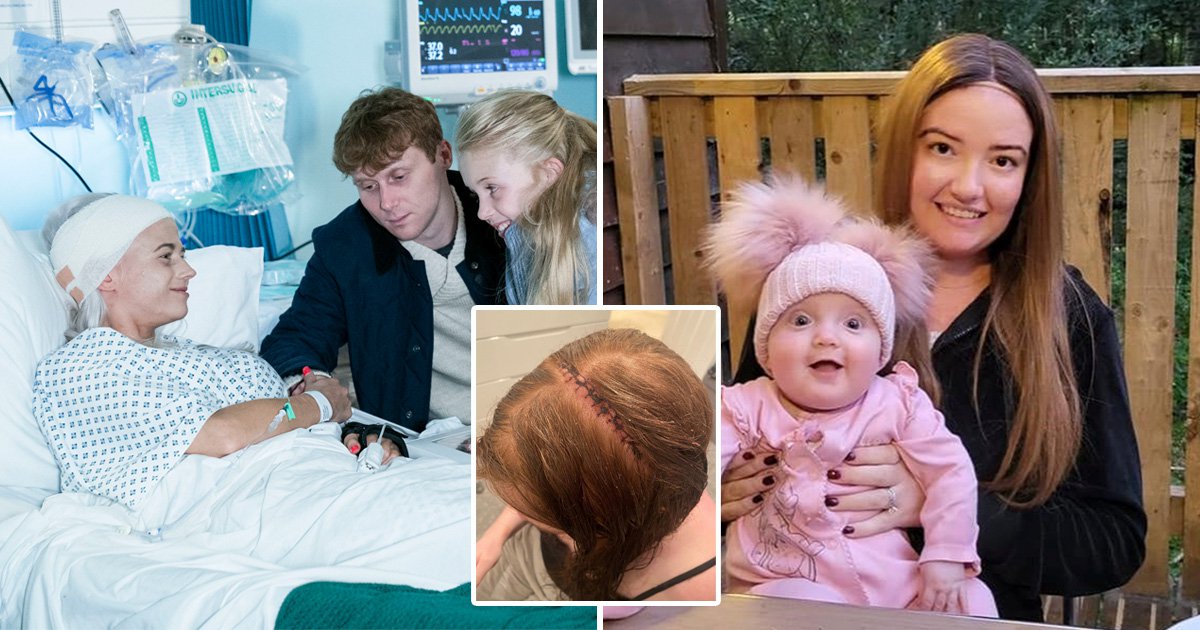 A 30-year-old who’s been given just two years to live has praised EastEnders brain tumour storyline – despite it being ‘sad’ to watch.

Laura Elizabeth Mahon, 30, was diagnosed with a glioblastoma (GBM) last year, when she was 20 weeks pregnant.

Even though she’s since been through chemotherapy and her tumour is stable, the prognosis for this type of tumour isn’t good.

EastEnders is currently airing a storyline that follows character Lola Pearce dealing with her own GBM diagnosis, and Laura’s praised the writing as being ‘so important’.

Laura, from St Helens, Merseyside, said: ‘It’s sad to watch what’s happening to Lola because it’s so close to my story.

‘It all came flooding back when Lola was told she had a brain tumour, how it was such a massive shock, and then the sitting in hospital and waiting for results.

‘Danielle Harold plays the role so well, it’s scarily accurate. I talk about the storyline with my husband, Danny, and my parents.

‘My mum got upset while watching it, but it’s so important to raise awareness because people don’t understand how quickly brain tumours change people’s lives.’

The first sign that something was wrong appeared in September 2021.

Laura woke up one day and couldn’t feel her toes, but at first she dismissed the symptoms and put it down to her pregnancy and how tired she was.

But just the next day, she could no longer move her right leg and was struggling to walk.

She saw a doctor, who thought her baby was pressing against a nerve, but an MRI scan revealed the real culprit was a tumour.

Laura said: ‘They told me it had more than likely been there for years and had now started growing.

‘It was such a shock. I was only 29 and didn’t think something like this could happen to me.’

Her pregnancy meant that she and her husband Danny, 29, were faced with ‘the toughest decision of their lives’ when Laura’s condition deteriorated.

They ultimately decided to bring Sienna into the world ahead of schedule at 30 weeks.

When she was born November 30, she weighed just 3.4lbs and was taken to the neonatal ward and needed an incubator.

Sienna’s collapsed lung meant she needed to go to Royal Oldham Hospital to receive specialised care, and even though she wasn’t well enough, Laura discharged herself from Warrington Hospital to be with her daughter.

Another MRI scan on December 9 revealed that not only had Laura’s tumour nearly doubled in size, but it was also inoperable as it was on her motor cortex and there was no way to safely remove it with surgery.

Then the biopsy revealed yet more bad news just days before Christmas.

She said: ‘Being told at 29 years old that you have inoperable stage 4 brain cancer and just two years to live is something you can never prepare yourself for.

‘Hearing that said out loud was a moment I’ll never forget.’

Now, Laura has finished six months of chemo and her latest scan has revealed that the tumour has shrunk and is stable.

Laura said: ‘It will be so lovely. Sienna is doing great, and she has just started nursery which she’s loving.

‘It’s so nice to see her developing, and she’s now trying to walk.

‘I see others with GBMs who manage to live longer, so I am clinging to the idea that I might be one of those people.

‘I’m fighting as hard as I can and I’m staying strong for my family.’

Laura is now working with charity Brain Tumour Research, which is calling on the Government and larger cancer charities to invest more in research into brain tumours.

Sue Castle-Smith, Head of PR and Communications at the charity, said: ‘We are grateful to EastEnders for helping to raise awareness of brain tumours.

‘Lola’s story is all too familiar to thousands of families; brain tumours are indiscriminate and can affect anyone at any age, they kill more children and adults under the age of 40 than any other cancer.

‘Increased awareness is vital as we campaign for the Government and the larger cancer charities to invest more to improve outcomes for patients and, ultimately, to find a cure.’