You are here:
Home / Health News / Mother, 35, risks her life to save her baby

Mother, 35, risks her life to save her baby

Mother, 35, risks her life to save her baby by undergoing dangerous transplant surgery to donate a piece of her liver

Firefighter Jonathan Roscoe is used to saving lives, but it’s his wife, Danielle, who has saved the life of their son Otis by donating part of her liver, after doctors warned he would die without a transplant.

Like many newborns, Otis appeared to have jaundice, where levels of bilirubin — a yellow substance produced by the breakdown of red blood cells — build up in the blood or liver. Newborns are prone to this as their livers are not efficient at clearing bilirubin from their little bodies. 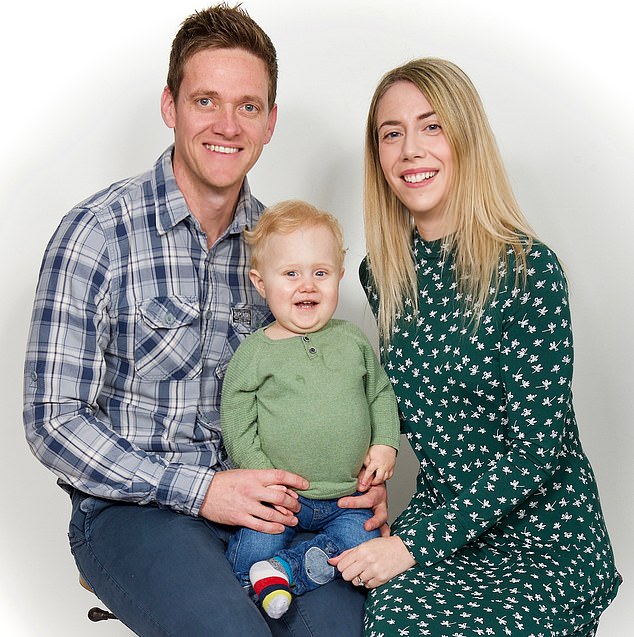 Firefighter Jonathan Roscoe (left) is used to saving lives, but it’s his wife, Danielle (right), who has saved the life of their son Otis

Midwives reassured Danielle and Jonathan that he would soon be fine, but after four weeks Otis was even more yellow and was struggling to gain weight. He was admitted to hospital for tests, which revealed liver abnormalities.

‘It was scary — no one had said what they were looking for,’ says Danielle.

The next day, Otis was transferred to a specialist paediatric liver unit at Leeds General Infirmary and doctors broke the devastating news that Otis had biliary atresia — a potentially fatal liver condition, in which bile ducts outside and inside the liver are blocked.

As a result, bile, which normally helps digest fats, can’t flow into the intestine and builds up in the liver, causing damage. Left untreated, the condition is fatal.

Every year, around 50 babies in the UK are born with biliary atresia and struggle to grow, as the liver does not process the fats and vitamins their body needs.

‘Jonathan and I couldn’t believe what was happening,’ says Danielle. ‘We had never heard of biliary atresia nor of its terrible consequences.’

The condition was identified 300 years ago but the exact cause is still unclear, says Professor Anil Dhawan, a paediatric hepatologist [liver specialist] at King’s College Hospital in London.

Otis needed emergency surgery, known as the Kasai procedure, where some of the damaged bile ducts are removed and replaced with a loop of intestine to allow the flow of bile, but even this was not guaranteed to succeed.

‘We were told the success rate for the procedure is around 60 per cent, but of those around half will still need a transplant in the future,’ says Danielle. ‘I had a meltdown, thinking “my tiny baby needs surgery; how will he get through this?”’

Two days later, her five-week-old son was wheeled into theatre for an eight-hour operation. His parents were told they would not know if it had been a success for at least a month. ‘After the operation, there was no change — he looked exactly the same,’ says Danielle. ‘Jaundiced.’

All they could do was take their baby home and wait. Every day, Danielle had to give Otis ten different medicines and vitamins via syringes into his mouth.

‘It felt like I had become a nurse,’ says Danielle. ‘It wasn’t anything like the maternity leave I thought I would have.’

In May 2018, when Otis was five months old, it was confirmed that the Kasai procedure had been unsuccessful and that some remaining bile ducts were still blocked. ‘It was crushingly disappointing,’ says Danielle.

Doctors warned the heartbroken couple that most children who’d undergone a failed Kasai procedure would die before the age of two, as their livers fail. 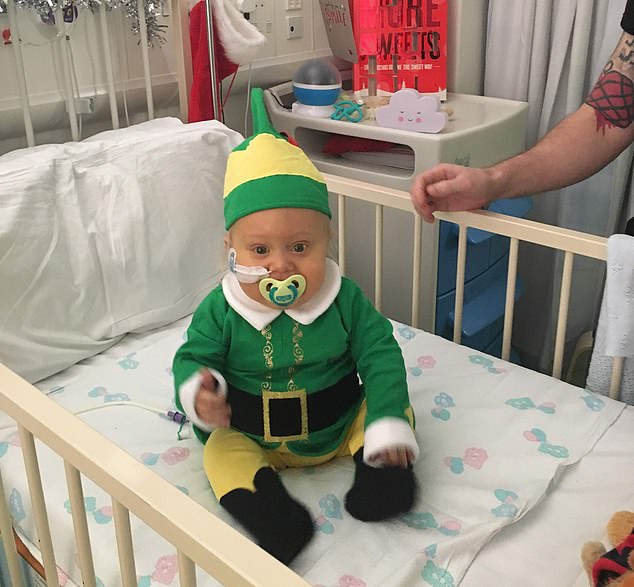 Otis was born following a straightforward pregnancy. Like many newborns, Otis appeared to have jaundice, but after four weeks Otis was even more yellow and was struggling to gain weight. He was admitted to hospital for tests, which revealed liver abnormalities. Pictured: Otis one year ago

‘We were told that a liver transplant was Otis’s only hope of survival,’ says Danielle.

At six months, Otis was still in clothes for a tiny baby, and because his liver wasn’t producing enough of the protein albumin — which keeps fluid in your bloodstream so it doesn’t leak into other tissues — fluid was collecting in his abdomen, causing painful swelling.

They were told Otis needed a transplant before his first birthday.

‘The panic and fear had really set in,’ admits Danielle.

‘There is a shortage of organs and due to his rare blood type, B negative, Otis stood a high chance of a longer wait.’

According to NHS figures, there are 405 adults and 34 children waiting for a liver transplant. Adults wait on average 91 to 107 days; children 84 to 130 days.

But there is one way of reducing the wait: a live liver donation, which involves taking a slither of the liver from a living person. ‘The liver is unique — it is the only solid organ that can rejuvenate itself,’ explains Professor Dhawan.

‘So the part of the liver received will then begin to grow inside the recipient.’

Meanwhile, the donor’s liver grows back to its normal size in about eight weeks.

Live liver donors don’t have to be an identical blood type but can simply be ‘compatible’ — which means those who are blood type O, for example, can donate healthy liver tissue to anyone, whatever their blood type. (Those with less common blood types are more restricted.)

Tests quickly ruled out Jonathan and his sister Karina as donors, but Danielle had the same blood type as Otis and was healthy. She shrugged off warnings about the risks of the surgery. 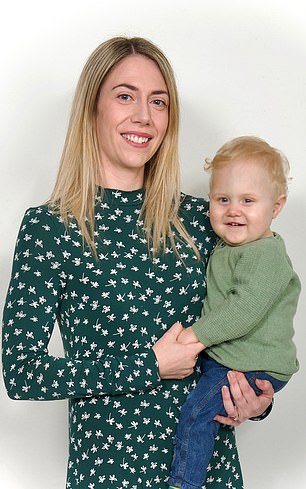 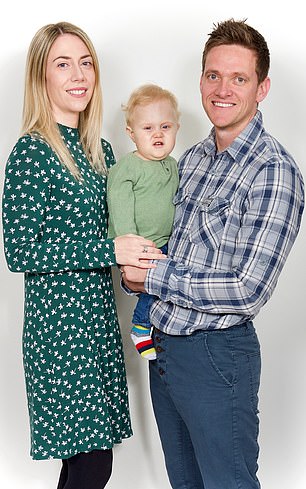 At six months, Otis was still in clothes for a tiny baby, and because his liver wasn’t producing enough of the protein albumin, fluid was collecting in his abdomen, causing painful swelling. They were told Otis needed a transplant before his first birthday. Pictured: Otis with his parents today

‘Doctors even told me I could die, but I tried not to dwell on this: I would do whatever it took to enable Otis to survive.’

Danielle underwent six weeks of physical and psychological testing while Otis was fading fast. By the end of November, even the whites of his eyes were yellow.

Finally on December 18, 2018, the green light was given and the operations went ahead. Danielle spent the evening before at Otis’s hospital bedside. ‘I remember gazing at him, thinking I may never see him again. Leaving him that night was awful.’

Danielle went to St James’ Hospital, where they do adult transplants. In an eight-hour operation, 20 per cent of Danielle’s liver was removed and blue-lighted across Leeds for Otis, who was already prepped for his 13 hours of surgery.

Using live donors brings different challenges from a deceased donor, says Naved Alizai, a consultant paediatric liver surgeon at Leeds General Infirmary. ‘When the liver is placed into the recipient, it is trickier for the surgeon as the blood vessels and ducts are shorter as you can take less out.’

But the signs of a successful donation are soon obvious. ‘Some people are up and about in two to three days,’ he adds.

Hours after Otis’s operation, Jonathan sent photos of him to Danielle. 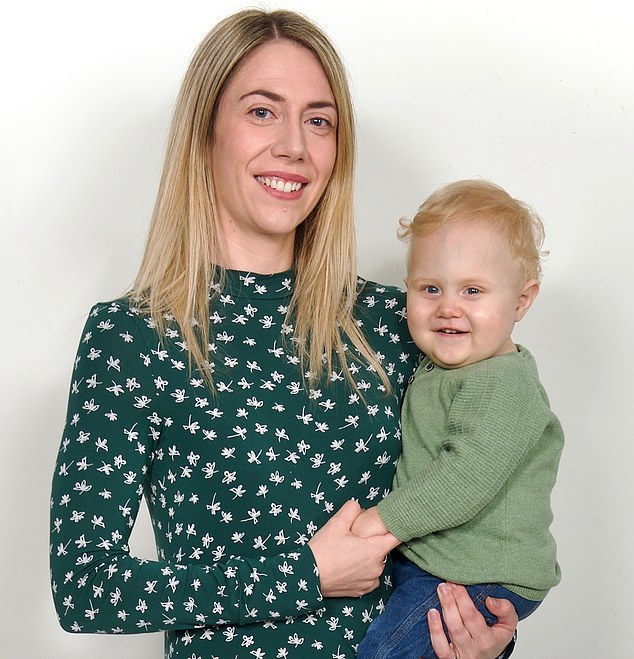 Tests quickly ruled out Jonathan and his sister Karina as donors, but Danielle had the same blood type as Otis and was healthy. She shrugged off warnings about the risks of the surgery

‘It was phenomenal,’ she recalls. ‘The results were instant. His eyes weren’t yellow any more — my liver was working for him.’

Five days later, Danielle was discharged and hurried to be with Otis. ‘He was covered in tubes but I cuddled him as much as I could,’ she says.

Danielle and Jonathan spent Christmas Day in hospital with Otis. ‘We put tinsel around his cot and he received presents from so many people,’ says Danielle.

Otis was discharged on January 7 and five weeks after the surgery, as Danielle puts it: ‘I hit the floor emotionally. I realised I’d spent the past year thinking Otis was going to die.’

Otis will take steroids and medicine to stop his body rejecting his new liver for the rest of his life. These leave him vulnerable to everyday infections. Recently, a stomach bug landed him in intensive care for a week.

But he’s now walking and talking and has even started at nursery.

His parents don’t know how long his liver will last. ‘It may last for ever or he may need another transplant in a couple of years,’ says Danielle. ‘We just take each day as it comes.’

They are really looking forward to Christmas this year. ‘It feels like our first proper Christmas together,’ says Danielle. ‘I can’t wait.’ She is determined never to take this or any Christmas with her son for granted.

‘Otis and I have matching scars on our tummies,’ says Danielle. ‘I tell him they are wonderful. They have given him a liver that works and, importantly, his life back.’