You are here:
Home / Health News / Lil Nas X Made a Video You Actually Really Should Show Your Kids

When Lil Nas X released his video for the single “Montero (Call Me By Your Name)” the self-righteous of the internet exploded with all the criticism you can imagine. And while that video (which is amazing) really isn’t child-appropriate, his newest one, for the single “Sun Goes Down,” should be required viewing for tweens and teens alike. 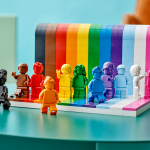 The video, which dropped Thursday night, features four-years-ago Lil Nas X (back when he was Montero Lamar Hill) working at Taco Bell, going to school, and ultimately going to prom. Alone. In the first verse, LNX describes the origin of this loneliness:

“Since 10, I’ve been feelin’ lonely.
Had friends but they was pickin’ on me.
Always thinkin’, ‘Why my lips so big?’
Was I too dark? Can they sense my fears?
These gay thoughts would always haunt me
I prayed God would take it from me.”

In one heartbreaking scene, teenage Montero leaves prom and heads for the bathroom where he closes himself in a stall and cries on the floor. In the chorus, he sings, “Send me a gun and I’ll see the sun.”

Present-day Nas shows up to comfort him and offers some words of wisdom. “I know that you want to cry / But it’s much more to life than dying / Over your past mistakes / And people who threw dirt on your name,” he sings.

After the future him gives past him a pep talk, the teenager returns to prom and hits the dance floor with a smile on his face.

The video is a perfect message of hope for kids who are struggling — especially when it comes to their sexuality.

Lil Nas X announced the video on Twitter Friday saying, “Sun goes down out now. This song is very important to me. Hope you guys love it.”

The 21-year-old rapper called “Sun Goes Down” his most vulnerable song.

“I definitely tell about some of my upbringing and it’s also just a really great song,” the Grammy winner told People magazine.

“And the video goes back to my past, to 2017 Lil Nas X in his prime. Like he was at prom, working at Taco Bell, and what he did in his room, praying his sexuality away,” he said. “Like all these things that I experienced that I wanted to share with my fans.”

“It’s been such a huge shift, a huge change,” he said about coming out in 2019. “It’s been a transformation throughout the small three years of my career so far. It’s been fun, it’s been sad, it’s been a lot of things. But that’s life.”

So, no sexy Satan lap dances to be seen here, so what will people clutch their pearls over instead?

These are some of the queer celebrity parents we look up to.