Fewer than two in 100 primary school children are eating a healthy packed lunch, a study suggests.

Analysis shows 1.6 per cent of packed lunches in England meet nutritional standards imposed on school canteens by the government, compared to 1 per cent in 2006.

The alarming figure has stagnated for a decade, despite a food education drive in the late 2000s.

Levels of sugar in lunch boxes has dropped in that time, but so too have the amounts of vitamins and minerals.

Researchers from the University of Leeds, who conducted the study, say children are still eating too much biscuits, crisps and chocolate and not enough fruit and veg.

They suggest packed lunches could be a hidden cause of the spiralling childhood obesity rates. One in three  pupils now leave primary school overweight or obese. 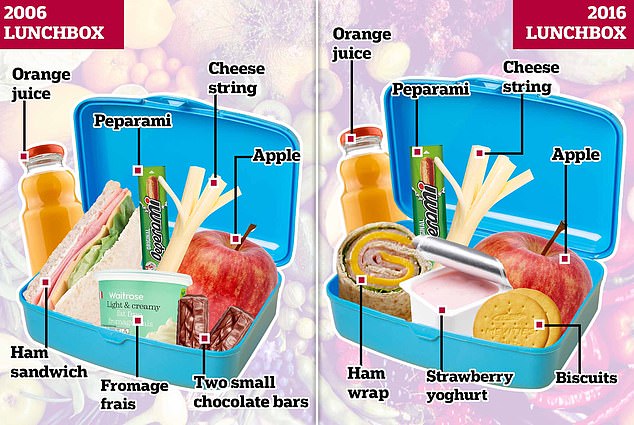 Packed lunches have remained largely the same since 2006, despite a food education drive in the late 2000s. Modern lunch boxes contain more wraps than bread and more plain biscuits than chocolate snacks, but both are still void of vegetables

Health officials ushered in a series of school dinner reforms after 2006, which forced schools to offer children balanced meals for their lunch.

Fizzy drinks and sugary fruit juice were replaced by flavoured water, while burgers and chips were swapped for baked potatoes and salad pots.

But there are no guidelines on what packed lunches should contain to make them healthy and nutritious, leaving parents in the dark.

And because more than half of primary school pupils take a lunch box to school, these meals contribute significantly to a child’s diet, experts say.

In their latest study, the Leeds researchers compared the contents of the packed lunches in 2006 and 2016.

They analysed 1,148 lunch boxes of eight and nine-year-olds in 76 schools across England in 2006.

How lunch boxes in 2006 compared to 2016: The most popular foods largely remained unchanged, with ham sandwiches, apples and crisps still the most popular

The 2008 Healthy Weight, Healthy Lives strategy pledged to reduce the ‘number of overweight and obese children in England to levels seen in the year 2000’, when 15 per cent of youngsters were deemed overweight.

Ministers brought in compulsory cooking classes in school as part of the pledge, and encouraged healthier food choices and physical exercise.

But official NHS figures show rates of morbid obesity have almost doubled among Year 6 pupils since the scheme was launched.

And obesity rates among Year 6 pupils rose by two-thirds in that time, jumping from 77,000 to 121,000, according to the NHS’ National Child Measurement Programme.

It means a third of children are overweight by the time they finish primary school.

They did the same for 323 children of the same age in 18 schools in 2016. To their surprise, the researchers found food remained largely unchanged over the course of the decade.

Ham remained the most popular sandwich filling, the favoured fruit was still an apple and cheese strings and crisps were two of the go-to snacks.

Vegetables were still the least common items, with only one in five children given these in their packed lunches.

But more children were taking cakes and biscuits that didn’t contain chocolate, an increase of nearly 10 per cent.

This suggests that parents believe snacks that don’t contain chocolate are somehow healthier than plain biscuits and cakes, which often have the same fat and sugar content.

Portion sizes fell for some items, including confectionery (by 6g), cakes and biscuits (by 13g), and cheese snacks (by 14g). But they also fell for fruit – 15g less – and milk based desserts, by 21g.

And the percentage of children’s packed lunches that met food standards – imposed on schools in 2006 – rose only slightly, from 1.1 per cent to 1.6 per cent in 2016.

Writing in the study, published in the British Medical Journal (BMJ) Open, the researchers said: ‘Although some children’s packed lunches contain healthy foods, packed lunches continue to be dominated by sweet and savoury snack foods and sugary drinks.

‘A minority of children eat vegetables or salad and this hasn’t changed in the past 10 years. 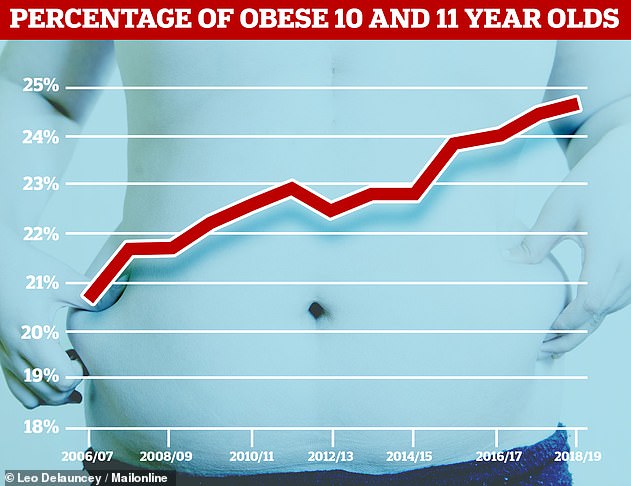 England’s 10 and 11 year olds are fatter than ever before, damning NHS statistics today revealed. Almost a quarter of Year Six children are obese or severely obese 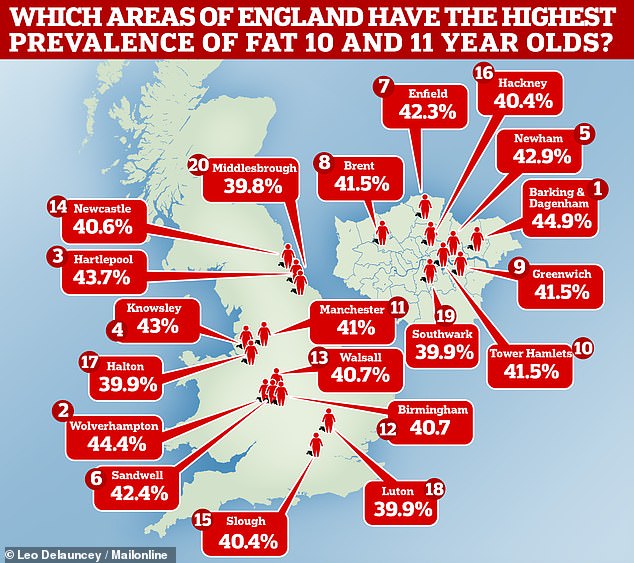 Almost half (44.9 per cent) of all year six children in Barking and Dagenham were considered to be overweight, obese or severely obese in 2018/19. In contrast, the rate was just 23.4 per cent in Richmond upon Thames, which had the lowest prevalence of obesity among 10 and 11 year olds

‘Although not directly comparable, results from this 2016 survey confirm that children’s packed lunches have improved in terms of levels of sugar provided, but continue to contain levels of saturated fat, added sugars and sodium that exceed current standards and recommendations.

‘Improving the quality of children’s packed lunches is a complex issue which needs strong support from many stakeholders, including government, industry and schools, if [it’s] to improve in the next 10 years.’

Reacting to the finding, Sidonie Sakula-Barry, families project lead at World Cancer Research Fund, said: ‘Many people will find this new research shocking but it is not surprising.

‘There are currently no government guidelines on what packed lunches should contain so that they are healthy and nutritious.

‘Some schools voluntarily create their own healthy lunch box policy, but this means there is no consistency across schools, so some children are missing out.

‘Given the amount of choice in shops for unhealthy food and drink that are often marketed as “family packs”, “good for lunchboxes” and “family value”, it is hardly surprising that parents go for these options due to the lack of reliable lunchbox guidance.

‘We hope the new government want to make it easier for parents to give their children nutritious meals by providing more guidance, and restricting junk food ads before 9pm.’

Meals should be based on potatoes, bread, rice, pasta or other starchy carbohydrates, ideally wholegrain, according to the NHS