You are here:
Home / Health News / Is honey healthy? How to make sure you don’t get stung

Is honey healthy? How to make sure you don’t get stung 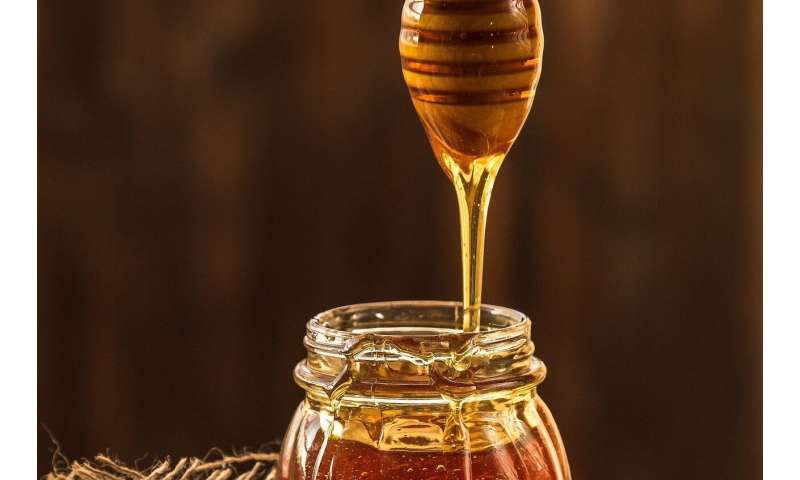 As temperatures fall, honey’s popularity tends to rise. Whether used as an ingredient in autumn recipes and holiday desserts, added to a celebratory cocktail or given to ease a child’s cough, it certainly satisfies a sweet tooth.

Although marketers may tout honey as a healthy alternative to regular sugar because of its antioxidant content, experts warn against adding any extra sugar to your diet.

“Added sugars in the diet are definitely something that people should keep low, regardless of the source,” said Maya Vadiveloo, assistant professor of nutrition and health sciences in the College of Health Science at the University of Rhode Island in Kingston. “Holistically speaking, I would not say consuming large amounts of added sugars—whether it be from honey, sugar, maple syrup or corn syrup—is a good thing.”

Honey is the sweet, syrupy substance made when bees collect nectar from flowering plants, consume it and regurgitate it in their hive, intending to use it as a food source. Beekeepers remove it from waxy honeycombs in the hive. It’s often processed before it’s sold, but it can be consumed raw.

It’s high in antioxidants, such as phenolic acids and flavonoids, which may support better health. Small studies in humans show honey’s antioxidants could help improve cholesterol levels, which could help decrease the risk for heart disease, although larger long-term studies are needed to confirm those findings.

Because of these qualities, honey often is touted as a better option than refined sugar, especially for people with diabetes.

However, honey itself is another form of sugar, and it should be consumed only in moderation, experts say.

Studies show added sugars can be empty calories that increase the risk for obesity, heart disease, high blood pressure and cavities. An advisory committee responsible for proposing revisions to the federal Dietary Guidelines for Americans, updated every five years, suggested in a July report that added sugars be cut to just 6% of daily calories, down from the current 10%.

A single tablespoon of honey contains 64 calories, with no fiber, almost no vitamins and very little protein.

Although not ideal for daily consumption, honey has been found to provide some specific medicinal benefits. Research shows it may be a good alternative for treating kids’ troublesome nighttime coughs, though it is not considered safe for children under one year old.

Honey also can be used to heal wounds and burns. It may be more effective than using traditional treatments such as gauze and linen, thanks to its antibacterial and anti-inflammatory qualities.

Some manufacturers contend that local honey lessens the symptoms of seasonal allergies, but research hasn’t borne that out. Medical experts say there is no way to know which types of pollen are in any particular batch of honey, and seasonal allergies usually are caused by pollen from weeds, trees and grass—not flowers.

But those who do eat honey still may find other benefits from choosing locally. “Whether it’s supporting the local economy, reducing carbon footprints, maybe reducing packaging in certain ways, there may be a lot of reasons,” Vadiveloo said.

One way to safely incorporate a taste of honey into your diet, she said, is to add it sparingly to an unsweetened product, such as yogurt.

“You’d be more likely to add less sugar than you would get when you buy it sweetened,” Vadiveloo said. “The more you can be in control of any added sugar you put into your body, the better.”

Another way to use honey sparingly as part of a healthy diet, she said, is to add a small amount to a healthier food that you are less likely to consume without the extra flavor. As an example, she suggested adding a mixture of one part honey and one part Sriracha sauce to roasted Brussels sprouts to give them a little kick.

“It could be a way of making some of these foods that people maybe don’t eat as readily a bit more palatable,” she said.

Related posts:
Tags: Don't get healthy honey How is make stung sure to you
SHARE ON SOCIAL MEDIA
RELATED NEWS