You are here:
Home / Health News / 'I Had Constant, Uncomfortable Urges To Pee For Years. At 32, I Was Diagnosed With Painful Bladder Syndrome'

'I Had Constant, Uncomfortable Urges To Pee For Years. At 32, I Was Diagnosed With Painful Bladder Syndrome'

In 2010, I was a 22-year-old college student when I suddenly started having the constant urge to pee. During the day, I had to go to the restroom 15 or more times, and at night I went another three or more times (which is not normal for someone drinking a typical amount of water every day). Worse yet, every time I did go to the bathroom, I ended up only releasing very small amounts of pee.

Often, I found myself telling whoever I was with, “Hey, I’ll be right back—gotta go to the bathroom,” when I’d just gone a moment ago. Sometimes I’d hold it on purpose because I was too embarrassed to say, “I have to go again.”

As a result, I started to spend a lot of time at home alone and fell into a depression. I missed parties, birthday celebrations, and even special occasions like Easter and Christmas. Whenever I went out, my first concern was knowing exactly where the bathroom was located. This gave me a sense of comfort, given that I knew I’d be heading there soon.

When I went in to see my primary care doctor for help in the summer of 2011, she suspected that I had a urinary tract infection (UTI). When my results came back negative, she advised that I stop drinking after 7:00 pm and cut out caffeine and alcohol. I also started keeping a diary of what I was drinking, how much, and how often. I stuck with this new regimen for months, but nothing changed.

My breaking point came when my frequent urge to go pee turned into constant pain and discomfort.

I started to notice that every time I had to hold my bladder (like when the bathroom was taken or during car rides), this triggered a wave of pelvic cramping, aching, and pain. When I did make it into the bathroom, I had to push hard, as if my bladder had stiffened.

Over time, I also began to have this aching and cramping feeling in my pelvic area became constant, as if my bladder and pelvic muscles were continuously contracting or spasming. At this point, I knew that my symptoms weren’t just embarrassing—something had to be seriously wrong with me.

“Desperate for relief from the pain, I tried physical therapy, acupuncture, and yoga. Nothing helped.”

In late 2011, after over a year of worsening symptoms, I was referred to another urologist for a second opinion. At my appointment, I was told that nothing was wrong with my bladder. This was tremendously upsetting because I *knew* that something had to be going on. I asked to see another doctor and was referred to Dr. Neeraj Kohli, MD, a urogynecologist at Brigham and Women’s Hospital in Boston.

At almost every doctor’s appointment I’d been to before, everyone would say to me, “Oh, you’re so young to be here.” That didn’t make me feel any better. But Dr. Kohli actually listened to me with genuine concern, told me he was there for me, and said that he had multiple patients of all ages dealing with the same symptoms. At the end of my appointment, he prescribed two medications to help reduce the frequency of my urge to go to pee.

At first, these meds seemed to help. But after a few weeks, all of my symptoms returned just like before. Desperate for relief from the pain, I tried physical therapy, acupuncture, and yoga. Nothing helped.

In the summer of 2011, I was finally diagnosed with interstitial cystitis (IC), a.k.a. painful bladder syndrome.

I felt relieved to finally have an answer to what was causing all of my problems. As I learned, IC is a long-lasting condition that can cause pelvic pain and a frequent and painful urge to pee. It’s unknown what exactly causes it, but inflammation may be to blame. Anywhere from three million to eight million women and one million to four million men in the U.S. might have it, per the National Institutes of Health (NIH).

There were multiple options for treatment, and again, I tried everything available, from expanding my bladder by filling it with water to botox injections for the pain. Still, my symptoms wouldn’t go away.

In January 2020, my doctor advised that I consider getting an implant to help reduce my constant urge to go.

It was called Axonics therapy. As he explained, the Axonics system was a tiny neurostimulator device about the size of a USB stick that would be implanted into my back on the lower right side. The device could help reduce my urge to pee by sending mild electrical pulses to the nerves that traveled from my spinal cord to muscles in my pelvis. It was remote-controlled, rechargable, made with no metal (so if I ever needed an MRI, I was in the clear), and had a battery life of over 20 years.

After a decade of a constant urge to pee and pelvic pain, getting an implant was a no-brainer for me. I agreed to it immediately. My surgery was scheduled for Monday, January 13th at 8:30 am.

The procedure only took about 25 to 30 minutes. When I woke up, I could immediately feel a fluttering sensation from the device. It felt like butterfly wings underneath my skin. I was given a prescription for a pain medication for the pain from the surgery and took the rest of the week off to recover. 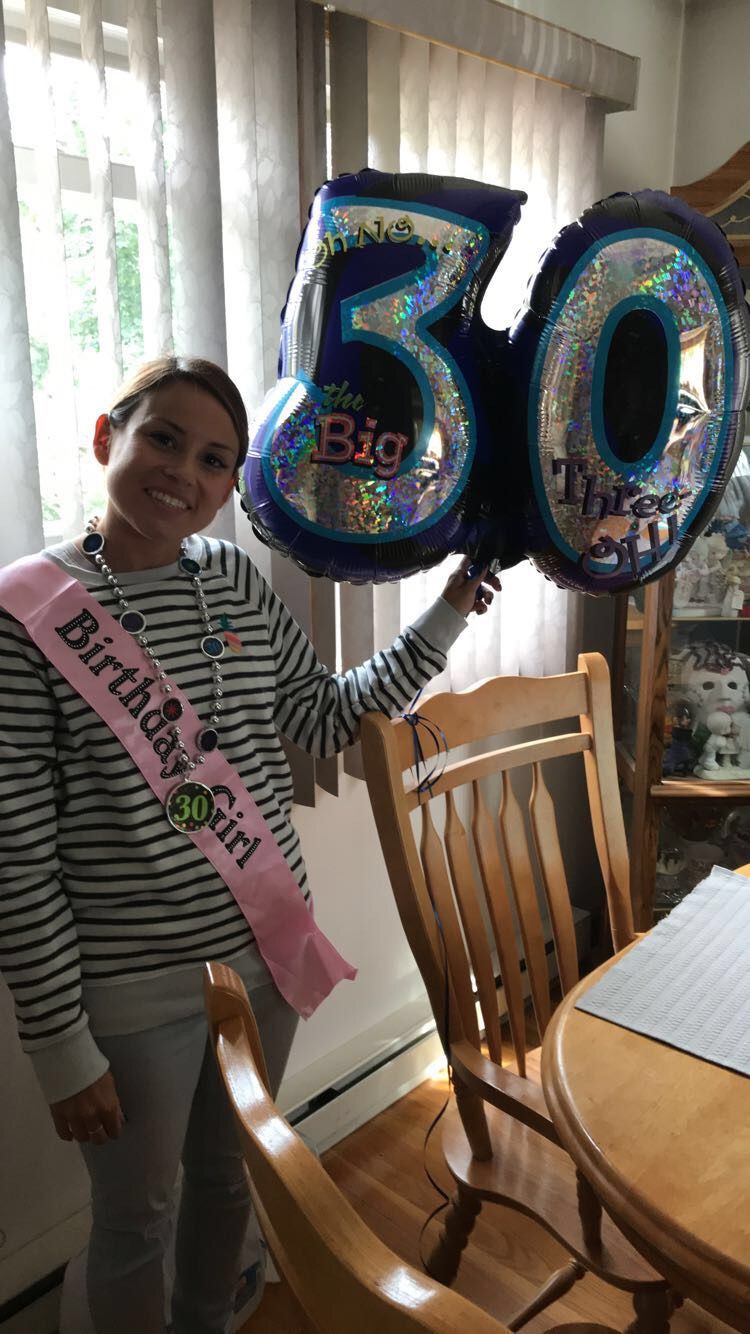 Lori on her 30th birthday.
Courtesy

My decision to get an implant was life-changing for me.

Looking back, what hit me hardest when I was first diagnosed with IC was that there was no cure for my condition, and I’d have to live with it for the rest of my life. But today, I’m free to drink more fluids (even alcohol and caffeine occasionally!), I no longer have pelvic and bladder pain, and I’m at last going to the restroom less frequently (only six to seven times a day!). Sure, I *sometimes* wake up in the middle of the night to go, but I’m not complaining.

Everyone’s body responds differently to an implant, but I’m pretty sensitive to mine. To adjust the device’s settings, I use a remote control that looks like a car key fob. If I turn it up to a higher setting, it feels as if a butterfly is fluttering its wings with so much strength and speed that it’s distracting. But at a lower setting, I can just go about my life and forget it’s even there. If it does ever become uncomfortable, I can just turn it down a little more. If I notice I’m going to the bathroom more frequently again (like ten times a day for multiple days in a row), I can turn it up again to reduce my urge to pee. 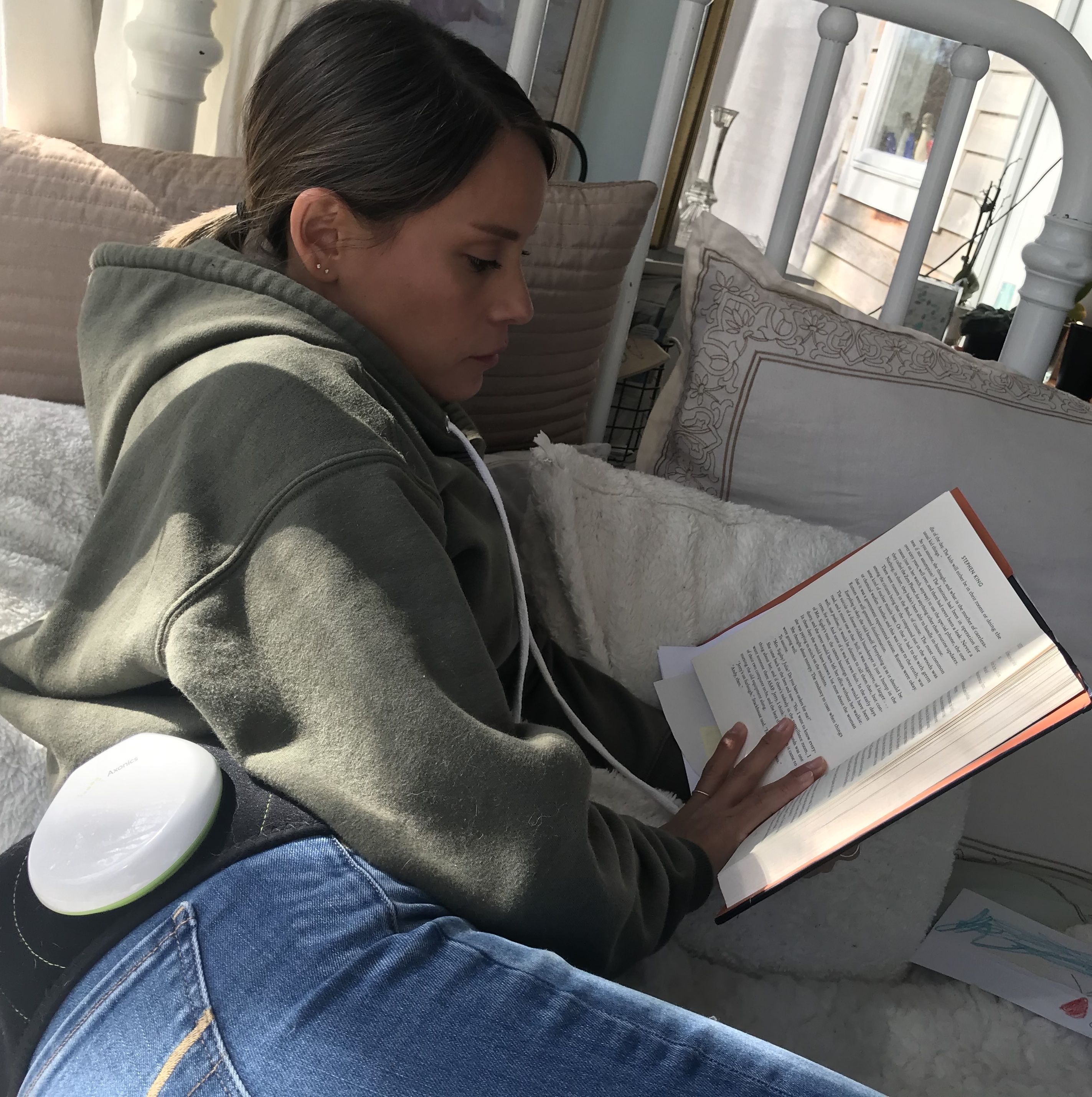 Every two weeks, I charge the Axonics system by clicking the charger into a belt and strapping it around my waist for about 45 minutes. Typically, I just use the time to catch up on a TV series, watch a movie, or read. Since I work as a preschool teacher now, I can also use the time to work on new curriculum ideas for my students.

In my case, having a doctor who really listened to me changed everything. It gave me so much relief and allowed me to finally find a treatment that worked for me. I understand that not everyone finds a great doctor right away, and that’s why it’s so important to be your own advocate—take it from me. If you’re experiencing similar symptoms, do your research, pay attention to how you’re feeling, and know that you deserve the best.

Related posts:
Tags: 32 at bladder Constant diagnosed for had I painful Pee syndrome to Uncomfortable urges Was With year’s
SHARE ON SOCIAL MEDIA
RELATED NEWS