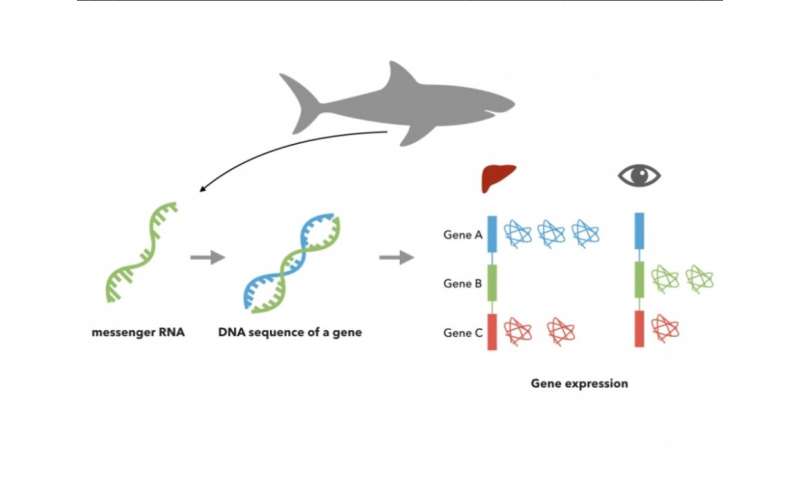 Anecdotal reports claim that the incidence of cancer in sharks is very low, but there is not enough data to confirm this estimate categorically. A study published in the journal Genomics, however, presents strong evidence of anti-tumor activity in the genome of the Shortfin mako shark, Isurus oxyrinchus.

This large pelagic species, which can be as long as 4 meters, inhabits temperate and tropical seas worldwide. It is classified as endangered by IUCN, owing mainly to non-selective longline fishing with hundreds of hooks by factory ships that capture many animals in a single pass. They spend up to two months at sea, bringing back hundreds or even thousands of tons of fish.

Fishery observers with the Portuguese Institute for Sea and Atmosphere (IPMA) collected tissue samples of various organs from four mako sharks on one of these ships. Brazilian researchers genetically sequenced eye and liver tissue samples, finding that nine out of the ten most overexpressed genes in the animal’s liver relate to tumor suppression in humans.

“Because these fishing cruises stay out at sea for such a long time, few of the tissue samples had well-conserved RNA. We managed to retrieve genetic material only from four livers and three eyes, but even so they produced surprising results,” said Rodrigo Domingues, first author of the paper. The study was conducted while Domingues was on a postdoctoral internship at the Federal University of São Paulo (UNIFESP) in its Department of Marine Sciences in Santos, Brazil, under the supervision of Fernando Mendonça.

Domingues performed part of the analysis while he was an intern at the Interdisciplinary Center of Marine and Environmental Research (CIIMAR) in Portugal, also with a scholarship from FAPESP (São Paulo Research Foundation). The research is part of a project involving Brazil-Portugal collaboration, funded by FAPESP and Portugal’s Foundation for Science and Technology (FCT).

The analysis revealed 3,774 differentially expressed genes in the two organs—1,612 in the eye and 2,162 in the liver. Most of the genes that were overexpressed in the eye related to the structure of the organ and visual signaling to the brain. Few genes relating to light reception were found, suggesting that the mako probably has monochrome vision and can see only shades of the same color, like all other sharks known to science.

The recently completed genome sequencing of the Great white shark (Carcharodon carcharias), the largest sequencing of any shark species, revealed two positively selected genes with anti-tumor activity. Hence the Brazilian researchers’ surprise on finding that out of the top ten overexpressed genes in the mako’s genome, no fewer than nine are cancer-related.

From colon cancer to glioma

Among the genes with above-normal activity in the liver, HABP2 is known to reduce colony formation and cellular migration in thyroid tumors, while PON3 encodes an enzyme that can act as a cellular antioxidant, protecting cells from oxidative stress, which is a significant factor in cancer.

NIT2, RMC1 and FGFRK1 are expressed in various tissues and are potential tumor suppressants. The first two relate to suppression of colon cancer cells, while the third has a negative effect on cell proliferation in the initiation and progression of prostate cancer.

ITIH3 is involved in inflammatory diseases, schizophrenia, depression, heart attack, and stomach cancer. CBS and A1CF are involved in the progression of colon, ovarian, and breast cancer, although CBS has tumor-suppressant effects in glioma, a common type of brain cancer. SERPIND1 plays a role in rapid wound healing in sharks, and in inflammation, blood clotting, and cancer metastasis in humans.

“To find out if any compounds from shark livers could act on human cells, we would need to make an extract from the organ and test it on tumor cells. If such bioactive compounds were found to produce a significant benefit, other groups could synthesize them and possibly use them to produce a new drug for therapeutic use,” Domingues said.

The authors note that the mako is already being overfished by commercial fleets, which sell its fins to Asian markets and its meat in Brazil. “We, therefore, discourage increased fishing of the species and a further population decline for this additional purpose. On the other hand, it might be possible to combine research activities in order to optimize the sampling of this endangered shark species, especially when scientific observers are on commercial vessels and can continue to take samples from specimens that are already dead when captured,” they write.