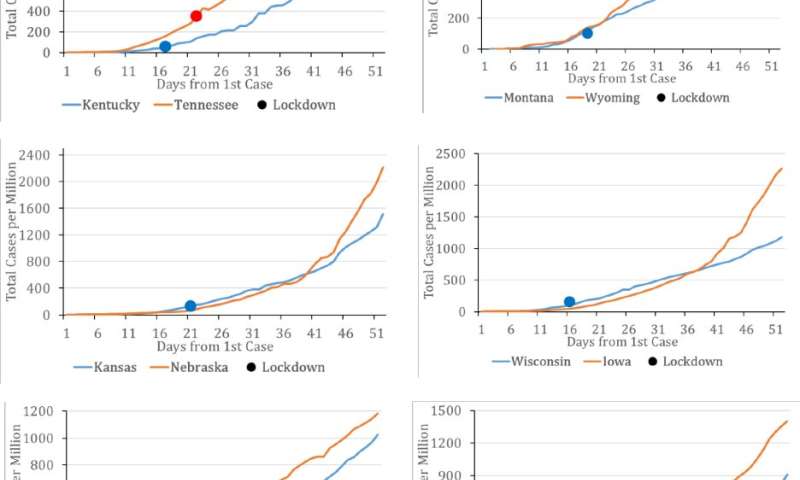 By comparing pairs of US states that differ only by the time of lockdown, a new study finds that according to results as of May 1, delay in lockdowns increase total cases by a 15% to 25% per week late, while failure to lockdowns increases cases by 45% to 128%. The study is titled, “Price of Delay” and is published on the open-source, early stage research platform Social Science Research Network SSRN. The authors are Gerard Tellis, Neely Professor at the USC Marshall School of Business, Ashish Sood, Associate Professor at University of California, Riverside, and Nitish Sood, from Medical College of Georgia at Augusta University.

The US did not have a mandatory social distancing policy in response to COVID-19. As a result, 50 states responded at different times with various policies, including lockdowns. The latter have become highly controversial with numerous groups around the country clamoring for them to be lifted. The authors chose to research a critical question: Are lockdowns really effective?

They find that the growth rate of the disease is declining in all states. However, Tellis pointed out, “Decline by itself could be due to better hygiene, social distancing, or lockdowns. To capture the sole effect of lockdowns, one has to identify two neighboring states that are similar in every respect, except the date of lockdowns. We identified seven such pairs.”

He added, “We call these pairs natural experiments, because we did not create but merely identified them.” Selecting neighboring states also controls for differences in the spread of the disease due to density, climate, housing, and occupation.

To further ensure a rigorous natural experiment, the authors computed total cases per million of the population and adjusted counts of cases from the dates the disease first started in each state.

Ashish Sood added, “The strength of our results resides not only in the care of constructing the natural experiments but also in the fact that results from all of them are consistently in the same direction, supporting the benefit of lockdowns.”

The figure included highlights the difference in total cases per million of the population between a state that locked down (blue) and a similar neighboring one that did not do so or did so late (red). In addition, the authors identify one natural experiment between one state that had a huge social mixer (Mardi Gras in Louisiana, attracting millions of tourists over two weeks) and another similar neighboring state, Missouri, without such an event.

“The state with the social mixer shows a big increase of almost 4,000 cases per million of population, amounting to a huge 163% increase in the penetration of the disease,” said Nitish Sood.

While governors have an intimate understanding of the economics of their own states, they may not fully appreciate the dangers of a pandemic. Moreover, even if they learn and draw from the experience of others, the resulting action may not be timely, as was the case of Louisiana not shutting down Mardi Gras versus the city in Austin, Texas shutting down South by Southwest.

“Governors are now considering reopening their states. Learning from the increase in total case due to delay in locking down the state would help them to make an informed decision about the true value of lockdowns,” added Ashish Sood.