The number of new COVID-19 cases in children declined for the sixth consecutive week, but the drop was the smallest yet, according to a report from the American Academy of Pediatrics and the Children’s Hospital Association. 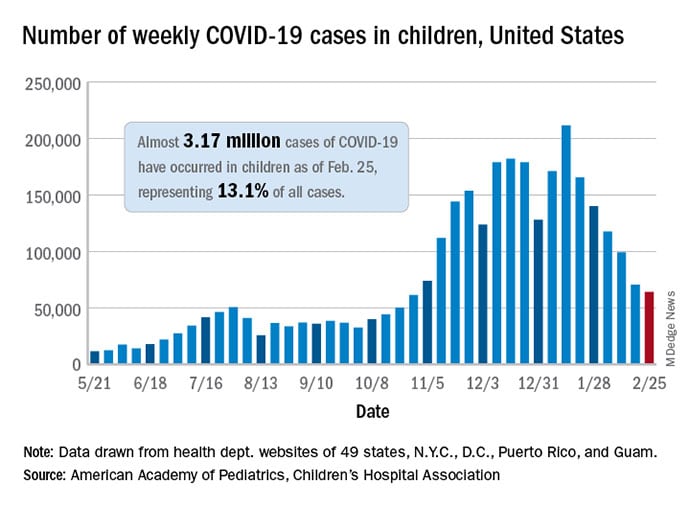 The total number of children infected with SARS-CoV-2 is up to almost 3.17 million, which represents 13.1% of cases among all age groups. That cumulative proportion was unchanged from the previous week, which has occurred only three other times over the course of the pandemic, the AAP and CHA said in their weekly COVID-19 report.

The number of new child deaths, nine, stayed in single digits for a second consecutive week, although it was up from six deaths reported a week earlier. Total COVID-19–related deaths in children now number 256, which represents just 0.06% of coronavirus deaths for all ages among the 43 states (along with New York City and Guam) reporting such data.

Among those jurisdictions, Texas (40), Arizona (27), and New York City (23) have reported the most deaths in children, while nine states and the District of Columbia have reported no deaths yet, the AAP and CHA noted.

This article originally appeared on MDedge.com, part of the Medscape Professional Network.