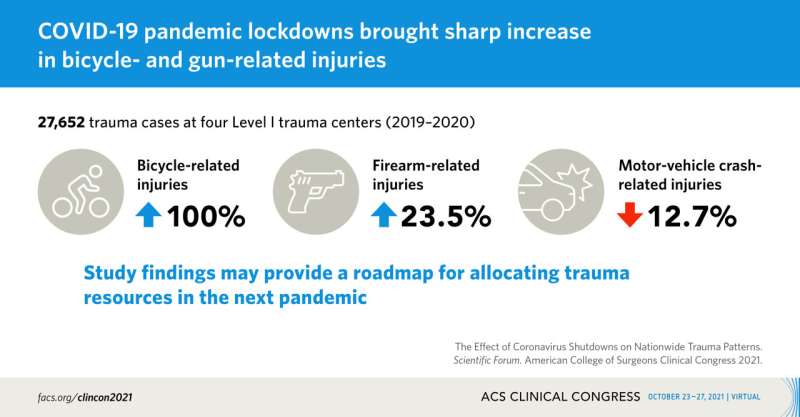 Despite regional variations in COVID-19-related restrictions last year during the lockdown phase of the pandemic, similar trends emerged in activity at Level I trauma centers in four different cities from the Southeast to the Northwest, according to research presented at the virtual American College of Surgeons (ACS) Clinical Congress 2021.

The data could help inform public policy decision-making for the next pandemic, study authors said.

A retrospective review of 27,652 trauma cases from 2019 to 2020 at four Level I trauma centers in Orange County, California; Portland, Oregon; Miami, Florida; and Tulsa, Oklahoma, found that overall activity followed similar patterns in these locations, with cases for motor vehicle collisions declining while those for gunshot wounds and bicycle accidents increased significantly.

“We were trying to assess if the different variations in COVID-19 shutdowns across the country affected trends,” said presenter Leonardo Alaniz, a third-year medical student at the University of California, Irvine. The findings bore out the study hypothesis—that trauma centers in four different cities with different levels of pandemic restrictions demonstrated similar trauma case patterns.

The trend for GSW was somewhat unexpected, senior author Cristobal Barrios, Jr., MD, FACS, said. “We thought we might see an uptick in the percentage of GSW given the percentages of MVC were down and the percentages might need to go up to cover that mechanism of injury; but we were mildly surprised that not only did the percentage go up, but the actual raw numbers of gun injuries went up,” said Dr. Barrios, a health sciences clinical professor in surgery and assistant dean of admissions at UC Irvine. “That was true across all the trauma centers that contributed data to the study.”

While the percentage changes in those three metrics varied among the individual centers, the overall trends followed the same pattern. The changes at each individual site are:

Dr. Barrios said the trends in MVC- and bicycle-related injuries during lockdown are understandable. “People weren’t going anywhere for any real large distances because there was nowhere to go during lockdown, but maybe they were utilizing their bicycles to get around a little bit, to get some exercise, and to get out of the house,” Dr. Barrios said. In June 2020, bicycle sales increased 63 percent over the same period in 2019, the market research firm NPD gGroup, Inc. reported.

These findings may help clinicians and policy makers to better prepare if pandemic-related restrictions are necessary in the future, Dr. Barrios said.

“We did this research to shed light on what to expect during any possible next lockdown for a pandemic and where to potentially put resources for clinicians in terms of what types of injuries might present and that might increase or decrease,” he said. “Tailoring resources was one point.”

One of the take-home findings, Dr. Barrios noted, was that more resources should be applied to addressing issues of wellness, namely stress reduction and mental health. “That might be why people were using bicycles more; to get out and get exercise and reduce their stress,” he said.