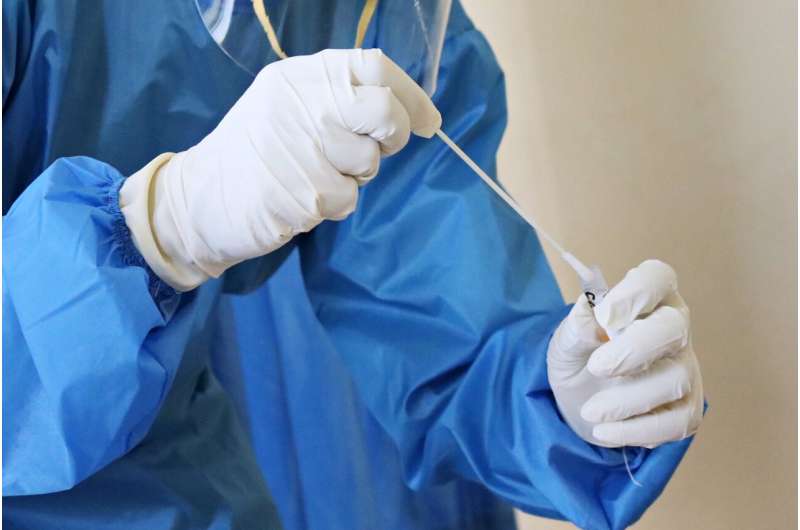 Breathe in, breathe out. That’s how easy it is for SARS-CoV-2, the virus that causes COVID-19, to enter your nose. And though remarkable progress has been made in developing intramuscular vaccines against SARS-CoV- 2, such as the readily available Pfizer, Moderna and Johnson & Johnson vaccines, nothing yet—like a nasal vaccine—has been approved to provide mucosal immunity in the nose, the first barrier against the virus before it travels down to the lungs.

But now, we’re one step closer.

Navin Varadarajan, University of Houston M.D. Anderson Professor of Chemical and Biomolecular Engineering, and his colleagues, are reporting in iScience the development of an intranasal subunit vaccine that provides durable local immunity against inhaled pathogens.

“Mucosal vaccination can stimulate both systemic and mucosal immunity and has the advantage of being a non-invasive procedure suitable for immunization of large populations,” said Varadarajan. “However, mucosal vaccination has been hampered by the lack of efficient delivery of the antigen and the need for appropriate adjuvants that can stimulate a robust immune response without toxicity.”

To solve those problems, Varadarajan collaborated with Xinli Liu, associate professor of pharmaceutics at the UH College of Pharmacy, and an expert in nanoparticle delivery. Liu’s team was able to encapsulate the agonist of the stimulator of interferon genes (STING) within liposomal particles to yield the adjuvant named NanoSTING. The function of the adjuvant is to promote the body’s immune response.

“NanoSTING has a small particle size around 100 nanometers, which exhibits significantly different physical and chemical properties to the conventional adjuvant,” said Liu.

“We used NanoSTING as the adjuvant for intranasal vaccination and single-cell RNA-sequencing to confirm the nasal-associated lymphoid tissue as an inductive site upon vaccination. Our results show that the candidate vaccine formulation is safe, produces rapid immune responses—within seven days—and elicits comprehensive immunity against SARS-CoV-2,” said Varadarajan.

A fundamental limitation of intramuscular vaccines is that they are not designed to elicit mucosal immunity. As prior work with other respiratory pathogens like influenza has shown, sterilizing immunity to virus reinfection requires adaptive immune responses in the respiratory tract and the lung.

The nasal vaccine will also serve to equitably distribute vaccines worldwide, according to the researchers. It is estimated that first world countries have already secured and vaccinated multiple intramuscular doses for each citizen while billions of people in countries like India, South Africa, and Brazil with large outbreaks are currently unimmunized. These outbreaks and viral spread are known to facilitate viral evolution leading to decreased efficacy of all vaccines.

“Equitable distribution requires vaccines that are stable and that can be shipped easily. As we have shown, each of our components, the protein (lyophilized) and the adjuvant (NanoSTING) are stable for over 11 months and can be stored and shipped without the need for freezing,” said Varadarajan.