You are here:
Home / Health News / Cocaine’s effect on the brain: Fruit fly research shows impact at the cellular level 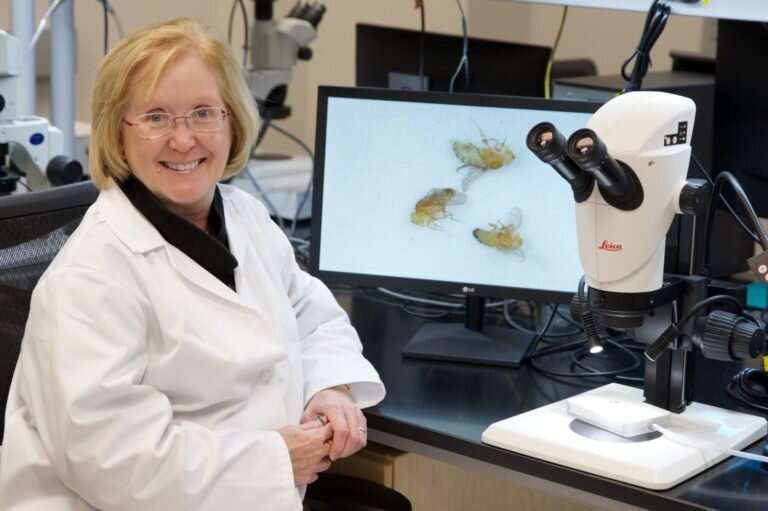 New research from the Clemson University Center for Human Genetics has identified specific cell clusters in the brain of the common fruit fly affected by acute cocaine exposure, potentially laying the groundwork for the development of drugs to treat or prevent addiction in humans.

While cocaine’s neurological effects are well known, the underlying genetic sensitivity to the drug’s effects is not. In human populations, susceptibility to the effects of cocaine varies due to both environmental and genetic factors, making it challenging to study. Approximately 70 percent of genes in the fruit fly, Drosophila melanogaster, have human counterparts, providing researchers with a comparable model when studying complex genetic traits.

Geneticists Trudy Mackay and Robert Anholt’s collaborative research found cocaine use elicits rapid, widespread changes in gene expression throughout the fruit fly brain—and that the differences are more pronounced in males than females.

Flies exposed to cocaine showed impaired locomotor activity and increased seizures. The study showed all types of fly brain cells were affected, especially Kenyon cells in the fly brain’s mushroom bodies and some glia cells. Mushroom bodies, which get their name because they look like a pair of mushrooms, are integrative brain centers that are associated with experience-dependent behavioral modifications.

These findings could eventually lead to therapeutics.

“This research identifies the regions of the brain which are important,” said Mackay, the Self Family Endowed Chair in Human Genetics. “Now, we can see what genes are expressed when exposed to cocaine and whether there are Federal Drug Administration-approved drugs that could be tested, perhaps first in the fly model. We’ve already spotted several of these genes. This is a baseline. We can now leverage this work to understand potential therapy.”

In the study, male and female flies were allowed to ingest a fixed amount of sucrose or sucrose supplemented with cocaine over no more than two hours.

Researchers observed their behavior after cocaine ingestion and found evidence that exposure to cocaine results in physiological and behavioral effects, including seizures and compulsive grooming.

To assess the effects of cocaine consumption on brain gene expression, the researchers dissected the fly brains and dissociated them into single cells. The researchers used next-generation sequencing technology to make libraries of the expressed genes for individual cells. Each cell has thousands of transcripts.

Through sophisticated statistical analysis, the researchers could group them into 36 distinct cell clusters. Annotation of clusters based on their gene markers revealed that all major cell types—neuronal and glial—as well as neurotransmitter types from most brain regions, including mushroom bodies, were represented.

“We found the effects of cocaine in the brain are very widespread, and there are distinct differences between males and females. There is substantial sexual dimorphism,” said Anholt, Provost’s Distinguished Professor of Genetics and Biochemistry. “We built an atlas of sexually dimorphic cocaine-modulated gene expression in a model brain, which can serve as a resource for the research community.”

“If an entire brain is used and there’s heterogeneity of gene expression, such that it’s up in one cell and down in another, you don’t see any signal. But with the single cell analysis, we’re able to capture those very, very fine details that reflect heterogeneity in gene expression among different cell types. It is very exciting to apply this advanced technology here at the CHG,” Mackay explained.

Mackay is one of the world’s leading authorities on the genetics of complex traits. She has a longstanding interest in behavioral genetics and developing the fruit fly as a model for understanding the genetic basis of complex behaviors. Her laboratory developed the Drosophila melanogaster Genetic Reference Panel (DGRP), which now consists of 1,000 inbred fly lines with fully sequenced genomes derived from a natural population. The DGRP allows researchers to use naturally occurring variation to examine genetic variants that contribute to susceptibility to various stressors.