You are here:
Home / Health News / Changing Minds: What Moves the Needle for the Unvaccinated?

Changing Minds: What Moves the Needle for the Unvaccinated? 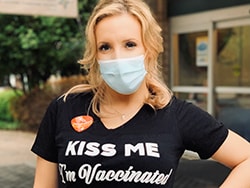 Not so long ago, Heather Simpson of Dallas was known as the anti-vaccine mom who dressed as “the measles” for Halloween. She painted red spots on her face and posted her photo on Facebook, joking: “Was trying to think of the least scary thing I could be for Halloween … so I became the measles.” It went viral with the anti-vaccine crowd.

But between that Halloween and today, a series of “aha” moments transformed Simpson’s attitudes toward vaccines.

In January 2021, one of those moments involved her daughter, now 4, who was scratched by a feral cat, raising concerns about tetanus. Her daughter had been bitten by a dog when she was just 1, and Simpson turned down advice then to get a tetanus shot. “I was convinced the tetanus shot would kill her faster than the tetanus.”

After the cat incident, the anxiety was so exhausting, she listened to the nurse practitioner at the clinic, whom she trusted. The nurse gently reassured Simpson that the shot was less risky than the possibility of tetanus — but did not bombard her with statistics — and that won over Simpson and triggered an overall rethinking of her vaccine stance.

Fast-forward to February, and that “aha” turned into action when Simpson launched a “Back to the Vax” effort with a fellow former vaccine opponent. Through their website, Facebook page, and podcasts, they now encourage people to get the COVID vaccine, as well as other immunizations.

With just over 52% of those eligible in the United States fully vaccinated as of September 1, health care providers and others have a continuing challenge ahead: Trying to convince those who are eligible but still holding out to get vaccinated.

Recent data and a poll do show some movement in the right direction, as immunizations are increasing and hesitancy is declining among certain groups. According to federal officials, about 14 million people in the U.S. got their first dose in August, an increase of 4 million, compared to the numbers who got it in July.

And a new poll from the Axios-IPSOS Coronavirus Index found only 1 in 5 Americans, or 20%, say they are not likely to get the vaccine, while “hard opposition,” those not at all likely, has dropped to 14% of those adults.

But there is still a lot of work to do. So, how do medical professionals or concerned citizens reach those who haven’t gotten vaccinated yet, whatever their reason?

Many experts in communication and persuasion that WebMD/Medscape talked to agree that throwing statistics at people hesitant to get the COVID vaccine is generally useless and often backfires.

So what does work, according to these experts? 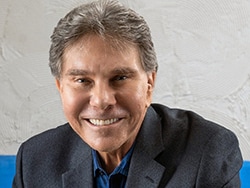 Talking about the trends of vaccinations can definitely change minds about getting vaccinated, says Robert Cialdini, PhD, regents professor emeritus of psychology and marketing at Arizona State University, Tempe, and author of the recently updated book Influence: The Psychology of Persuasion, which has sold over 5 million copies since first published in 1984.

Face-to-face with a hesitant patient, a doctor can say: “More and more people are being vaccinated every day,” Cialdini says. “The reason you say more and more is [that] it conveys a trend. When people see a trend, they project it into the future that it is going to get even larger.”

A focus on choice can also help people change their minds and accept the vaccine, he says. “A lot of conspiracy theorists claim they don’t want to do it because they are being pushed or forced by the government, and they are resisting that.”

If that’s the case, presenting people with new information, such as the increased infectiousness of the Delta variant, and suggesting that a decision be made based on the new information, can work, Cialdini says, but be sure to end with: “It’s completely up to you.”

“This removes all their sense of being pushed. It says, ‘Here is all the evidence.'” At this point, a doctor’s personal recommendation with a patient who trusts them may sway them, Cialdini says. “I think you have to personalize the communication in both directions. That is, to say, ‘For someone in your situation, I would personally recommend that you get the vaccine.'” A health care professional’s authority and expertise can carry the day, he says, although “not always.”

Then: “For someone in your position, my personal recommendation is to get vaccinated. There is new information about the vaccine, and more and more people are getting vaccinated. And of course, it is completely up to you.”

The person decided to get the vaccine.

‘Live in That Space‘

“People develop negative attitudes [about vaccines] by accessing alternative sources of information, anecdotes, and personal stories,” says Matthew Seeger, PhD, dean of the College of Fine, Performing and Communication Arts and co-director of the Center for Emerging Infectious Diseases at Wayne State University in Detroit.

“If we are going to change their opinion, we need to live in that space.” That means listening first, he says. Ask: “Where did you get that information? How credible do you think the sources are? What do you mean about the vaccine changing DNA?”

Then, you might respond, he says, by addressing that specific information, such as, “We have no cases of DNA being changed.”

Seeger recalls that his mother would simply talk louder when she couldn’t understand someone who wasn’t a native English speaker. “That’s what we are trying to do with the vaccine-hesitant,” he says. “In some cases, we are yelling at them.” Instead, he says, probe their sources of information.

For some who are vaccine-hesitant, Seeger says, it is not just about the vaccine. The attitude about vaccines is tied in, often, with a distrust of government and feelings about personal freedom. “That’s one reason it’s so hard to change the attitude.” For some, getting the vaccine in a family against the vaccine might also disrupt their social structure or even get them ostracized.

For these people, a health care provider might give opportunities to get the vaccine without affecting either what they see as their political stance or upsetting family harmony. “There are places you can go, make an appointment, get a vaccine, and nobody knows,” Seeger says.

From Peer to Peer

A theme that runs through many of these persuasion techniques is peer pressure.

One example, while a bit more profane and confrontational than some groups, is COVIDAteMyFace, a subgroup, or “subreddit,” of the popular online site Reddit, which hosts numerous forums inviting users to share news and comments on a variety of topics. The subreddit has over 20,000 members. Its purpose, says the sub’s creator, “was to document the folks who denied COVID, then got bitten in the ass by it.” Reports are of actual cases.

“It’s interesting and powerful that Reddit users are taking this on,” Seeger says. And this kind of peer pressure, or peer-to-peer information, can be persuasive, he says. “We often seek consensual validation from peers about risk messages and risk behaviors.”

For instance, hurricane evacuation notices are more effective, he says, when people learn their neighbors are leaving.

Peer information — “the number of others who are doing or believing or responding to something — definitely persuades people,” agrees Cialdini. “When a lot of others are responding in a particular way — for example, getting vaccinated — people follow for three reasons: The action seems more appropriate or correct, it appears more feasible to perform, and it avoids social disapproval from those others.”

Let Them Talk, Give Them Time

Gladys Jimenez is a contact tracer and “vaccine ambassador” for Tracing Health, a partnership between the Oregon Public Health Institute and the Public Health Institute that has nearly 300 bilingual contract tracers who serve the ethnic communities they’re from. During a typical week, she talks to 50 people or more, and promoting the vaccine is top of mind. 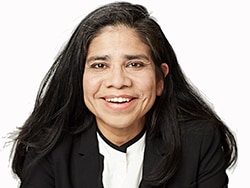 The conversations, Jimenez says, are like a dance. She presents information, then steps back and lets them talk. “I want to hear the person talk, where they are coming from, where they are at.” Depending on what they say, she gives them more information or corrects their misinformation. “They often will say, ‘Oh, I didn’t know that.'”

It’s rarely one conversation that convinces hesitant people, she says. “I’m planting this seed in their brain. … people want someone to listen to them … they want to vent.”

Once you let them do that, Jimenez says, “I can tell the person is in a different state of mind.” She also knows that people “will make the decision in their own time.”

With time, people can change their minds, as a Southern California woman who resisted at first (and asked to remain anonymous) can attest. “When the vaccine first came out, I remember thinking [that] it was a quick fix to a very big problem,” she says. The lack of full FDA approval, which has since been granted, was also an issue. She doesn’t oppose vaccines, she says, but was leery just of the COVID vaccine.

When her longtime partner got his vaccine, he urged her to go right away for hers. She stalled. He got his second dose and grew impatient with her hesitancy. It began to wear on the relationship. Finally, the woman talked to two health care professionals she knew socially. They both follow the science, and “they both could explain vaccination to me in a way that resonated. The information was coming from sources I already trusted.”

Those conversations are what convinced her to get vaccinated this summer.

Simpson of Back to the Vax got her first COVID immunization April 16. She had an allergic reaction, including severe itchiness and a bad headache, and needed emergency care, she says. Even so, she’s scheduled her second shot appointment for next week.

Like many who turned against vaccines as adults, Simpson had all her childhood vaccines, but she developed a distrust after watching a lengthy documentary series that warned of vaccine dangers as an adult.

So did the claim from a family friend who said she knew someone who got the flu shot and began walking backward. She researched on her own, and with time, she decided to be pro-vaccines.

These days, she continues to find that stories, not statistics, are changing the minds of many who decide to get vaccinated. If the nurse practitioner urging the tetanus shot for her daughter had told her that the tetanus shot is linked with problems in one of a specific number of people who get it, no matter how large that second number was, Simpson says she would have thought: “What if she is that one?“

So she relies on stories that point out how universally vulnerable people are to COVID first, facts next.

“Facts help once you are already moved,” Simpson says.