You are here:
Home / Health News / Cause of neonatal strokes identified

Cause of neonatal strokes identified 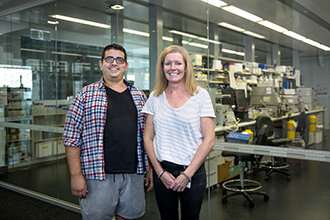 Scientists have discovered an important cause of stroke occurring in the womb or just after birth, paving the way for new treatments.

The research identified that a low number of platelets (small blood cells known for enabling clotting) in babies, either in the womb or in newborns, could cause bleeding in the brain. These types of bleeds can lead to fatal strokes or permanent neurological conditions, such as cerebral palsy.

Published in Blood, the research led by Dr. Alison Farley and Dr. Samir Taoudi identified that platelets played a crucial role in the fetal and newborn brain in preclinical models.

“Thrombocytopenia” is a reduction of platelets, which can allow excessive bleeding to occur if blood vessels are already damaged.

Dr. Farley said thrombocytopaenia could occur during fetal development, but the consequences of this had not been well studied.

“We pinpointed a clear link between low platelets and brain bleeds. We also showed that the time point at which thrombocytopenia occurs, determines the region of the brain where bleeding occurs,” she said.

Dr. Farley said the research was the first step in identifying new treatments to prevent these strokes.

“Previously, it was thought that platelets weren’t required during the early stages of development, but this research proves that platelets play a crucial role during this time,” she said.

“We are now trying to understand exactly when in fetal development platelets become important, so we can monitor and treat this condition during pregnancy.”

Improving monitoring and treatments in pregnancy

Dr. Taoudi said there was still plenty to uncover about treating thrombocytopaenia in fetuses and newborn babies.

“We know how to treat low platelet counts in adults, but we aren’t yet sure how effective these treatments are for babies, and that is what we hope to address in our future studies. Platelet transfusions into fetuses has been tried but the benefits of this highly invasive procedure are not yet clear,” he said.

“Our next step is to identify the optimal window for when treatment should occur during pregnancy to prevent these strokes.”

Dr. Taoudi said he hoped this discovery would lead to improved screening and treatment during pregnancy and shortly after birth.

“The question we are now looking to answer is how low platelets need to get to before you have a problem,” he said.

“At the moment, we don’t know what a normal platelet count is for unborn babies or neonates, so that’s an important aspect for us to understand before we are able to treat this condition.”

A major funder of the research was the Cerebral Palsy Alliance Research Foundation. One in every 700 babies born in Australia is diagnosed with cerebral palsy, which is suspected to be one of the conditions caused by fetal stroke.