You are here:
Home / Health News / Both mRNA vaccines protect against emerging variants of SARS-CoV-2

Both mRNA vaccines protect against emerging variants of SARS-CoV-2

Researchers in the United States and Canada have conducted a study showing that just a single dose of either the Pfizer-BioNTech or Moderna vaccine against severe acute respiratory syndrome coronavirus 2 (SARS-CoV-2) is likely to protect against emerging variants.

The SARS-CoV-2 virus is the agent responsible for the coronavirus disease 2019 (COVID-19) pandemic that continues to pose a significant threat to global public health and the worldwide economy.

The Pfizer-BioNTech and Moderna COVID-19 vaccines are based on the spike protein of a SARS-CoV-2 strain (Wuhan-Hu-1) that was isolated in December 2019. The spike protein is the surface structure the virus uses to bind to and infect host cells.

However, concerns have arisen that recently emerged SARS-CoV-2 variants such as the B.1.351 strain from South Africa will be resistant to the neutralizing antibodies elicited due to previous infection or vaccination.

Now, researchers from the Fred Hutchinson Cancer Research Center in Seattle and CHUM Research Center in Montréal have shown that just a single dose of either the Pfizer-BioNTech or Moderna vaccine generated a 1000-fold increase in neutralizing antibody titers against both the vaccine-matched Wuhan-Hu-1 strain and the B.1.351 variant among convalescent individuals.

“Overall, our results strongly suggest that boosting pre-existing immunity through vaccination with the Wuhan Hu-1 spike will lead to an increase of neutralizing antibody responses not only against the vaccine-matched strain but also against emerging mutant variants,” writes Andrew McGuire and colleagues.

A pre-print version of the research paper is available on the medRxiv* server, while the article undergoes peer review. 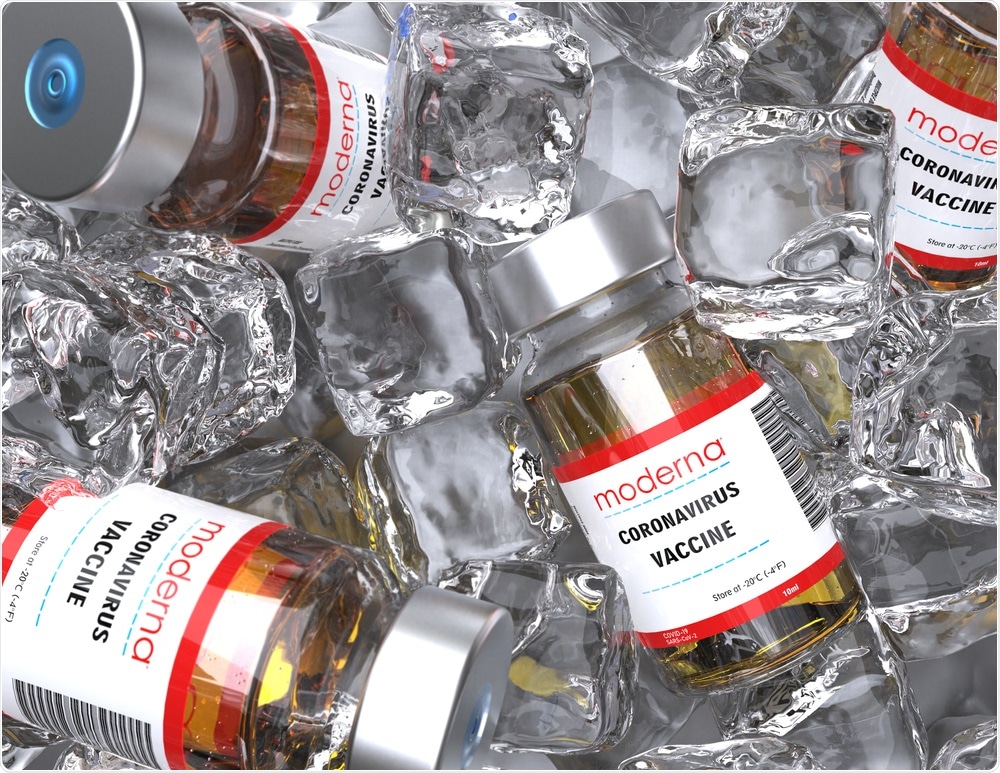 The SARS-CoV-2 infection process and neutralization

The SARS-COV-2 infection process is mediated by the viral spike protein, which binds to the host cell receptor angiotensin-converting enzyme 2 (ACE2) via its receptor-binding domain (RBD).

Studies have shown that pre-existing immunity to SARS-CoV-2 is associated with protection against reinfection in humans and in non-human primates.

“Although the correlates of protection in humans against repeat infection or following vaccination have not been firmly established, neutralizing antibodies are thought to be an important component of a protective immune response against SARS-CoV-2 infection,” says McGuire and colleagues.

Both the Pfizer-BioNTech and Moderna vaccine are based on SARS-CoV-2 spike protein derived from the Wuhan-Hu-1 strain isolated in December 2019.

These vaccines have been shown to be more than 94% effective at eliciting neutralizing antibodies and preventing COVID-19. 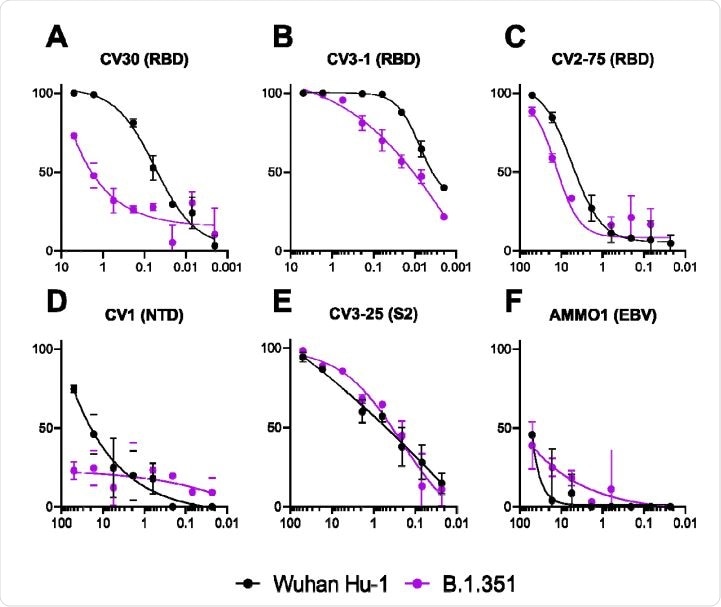 The ability of the mAbs to neutralize Wuhan Hu1 and B.1351 pseudovirus infectivity in 293-ACE2 cells was measured as indicated. The epitope specificity of each mAb is shown in parentheses (RBD: receptor binding domain; NTD: N terminal domain; S2: S2 subunit; EBV: Epstein-Barr virus). Data is representative of two independent experiments.

However, the SARS-CoV-2 variants that have arisen in the United Kingdom (B.1.1.7), South Africa (B.1.351), and Brazil (P.1) contain specific mutations in the spike that experts are concerned could confer resistance to neutralizing antibodies elicited due to previous infection or vaccination.

“Indeed, there is concern that these mutations are responsible for reduced efficacy observed in ongoing trials of SARS-CoV-2 vaccines in South Africa,” write the researchers.

The team examined whether sera from 10 convalescent donors could neutralize the Wuhan-Hu-1 strain and the B.1.351 variant, both before and after donors were administered a single dose of either the Pfizer-BioNTech or the Moderna mRNA vaccine.

Prior to vaccination, sera from the recovered donors exhibited weak neutralizing activity against the Wuhan-Hu-1 strain, and only 50% of samples weakly neutralized the B.1.351 strain.

“Our study reveals that sera from persons who were infected with SARS-CoV-2 early in the pandemic display generally weak neutralizing activities against the Wuhan Hu-1 virus at 4-8 months post-infection,” says McGuire and colleagues.

Did the vaccines make any difference?

Immunization with either the Pfizer-BioNtech or Moderna vaccine significantly increased memory B cells and CD4+ T cell responses to both the vaccine-matched Wuhan-Hu-1 strain and the mismatched B.1.351 variant.

Moreover, both vaccines induced an approximately 1000-fold increase in neutralizing antibody titers against both strains.

“A single immunization with either mRNA vaccines encoding the Wuhan Hu-1 spike elicited a robust recall response that boosted the neutralizing tiers by approximately 1000-fold,” writes the team.

The researchers say the findings suggested that the observed increase in neutralizing antibody responses post-vaccination was primarily due to an increase in anti-RBD antibodies.

What do the authors advise?

“Collectively our data suggest that vaccines based on one of the earliest clinical samples of SARS-CoV-2 are capable of boosting pre-existing antibody titers,” writes McGuire and colleagues.

The researchers say the study strongly suggests that previously-infected subjects will benefit from even a single immunization with either the Pfizer or Moderna vaccine.

Sally has a Bachelor's Degree in Biomedical Sciences (B.Sc.). She is a specialist in reviewing and summarising the latest findings across all areas of medicine covered in major, high-impact, world-leading international medical journals, international press conferences and bulletins from governmental agencies and regulatory bodies. At News-Medical, Sally generates daily news features, life science articles and interview coverage.