Barnsley has joined a string of obesity-fighting councils by banning junk food ads on all public buildings.

The South Yorkshire council said it will restrict adverts for food high in fat, sugar and salt to ‘protect’ children and adults from seeing displays which can ‘influence what people eat and drink, as well as how much’.

It will apply to products such as cakes, biscuits and crisps.

A third of youngsters and two-thirds of adults are overweight in Barnsley, which is in line with the UK as a whole.

The local authority is the sixth in the country to restrict unhealthy advertising, which campaigners say removes the spotlight from junk food.

Experts found the same policy on the London underground, rail and bus network led to households in the capital eating 1,000 fewer calories per week.

Julia Burrows, Barnsley’s director of public health, said the move will ‘make it easier to be healthy’. 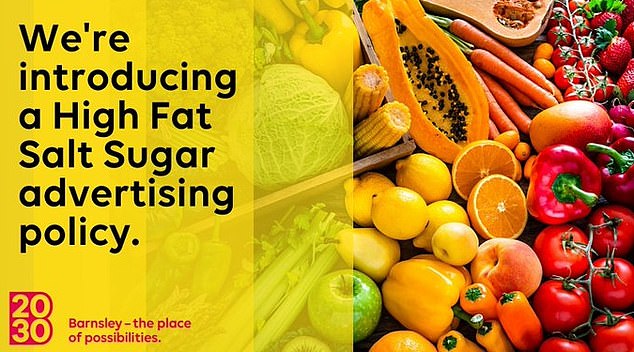 Barnsley has become the first town in the UK to ban junk food adverts on all public buildings to bring down obesity rates. The council in South Yorkshire said it will restrict adverts for food high in fat, sugar and salt to ‘protect’ children and adults from seeing displays that can ‘influence what people eat and drink, as well as how much’

Council bosses will now work with businesses to ensure they can ‘advertise healthy food and drink’.

The rules in Barnsley apply to all advertising sites it owns, including online as well as traditional in-person displays.

It also applies to adverts that do not feature junk food directly but show a brand or directions to a store, app or website that sells unhealthy products.

Ms Burrows said: ‘We want everyone in Barnsley to have the best possible chance of enjoying life in good physical and mental health.

‘This guidance note is just one element of what we’re doing to make it easier to be healthy.’

‘We’re working with businesses who already advertise with us and will work collaboratively with any future businesses to make sure they can advertise healthy food and drink with us.

‘We’re hoping this will be the first step in other organisations in Barnsley adopting a similar policy.’

The council developed the advertising rules with food charity Sustain, which is working with 80 other local authorities in England to bring in healthier advertising policies.

Similar approaches have been rolled out in five other councils: Greenwich, Haringey, Merton and Southwark in London, as well as Bristol city.

Researchers from the London School of Hygiene and Tropical Medicine found that the policy cut household calorie intake from junk food by 6.7 per cent and chocolate and sweet purchases fell by a fifth.

‘As the first town in the north to introduce these policies, we hope their achievements will inspire other areas across the country to take a stand for children’s health.’

Sustain says all companies can continue to advertise under the rules as long as they promote a healthier product.

It comes as the Government is bringing in rules from October that will see foods high in fat, sugar or salt banned from shop checkouts and store entrances.

The Prime Minister announced a crackdown on obesity in 2020 after a near-fatal bout of Covid which he attributed to being overweight.

As part of the plan, a rule came into effect in April requiring restaurants, cafes and takeaways with more than 250 staff to list calories on their menus.

But Boris Johnson has U-turned on separate rules which would have banned BOGOF and other multi-buy junk food deals.

Free refills of sugary soft drinks will also be allowed for another year, despite plans to axe them.