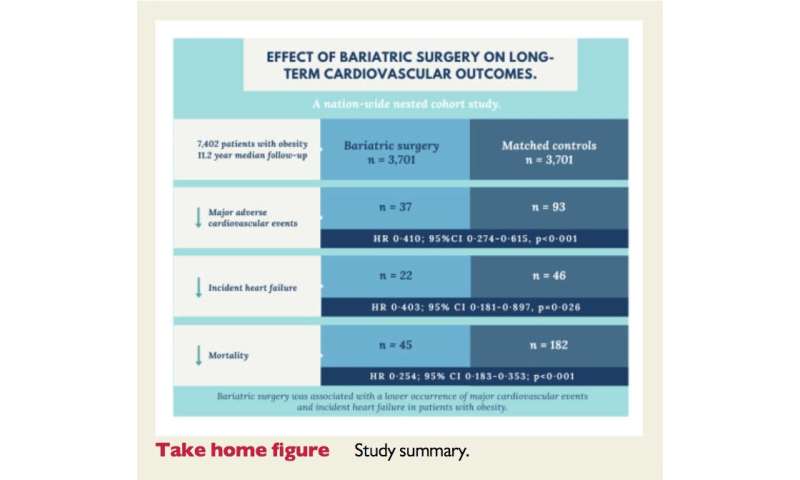 A nationwide study of nearly 7,500 people who are obese or severely obese has found that bariatric surgery is linked to significantly fewer heart attacks and strokes.

The study, which is published in the European Heart Journal today, found there were 60% fewer fatal and non-fatal heart attacks and stroke among 3,701 men and women who received bariatric surgery compared to the same number of patients who did not, during an average of 11 years following the surgery.

In addition, patients who had bariatric surgery lost significantly more weight (an average of over 10 kg more), and type 2 diabetes was more likely to improve to the point where the patients no longer required medication to maintain normal blood sugar levels.

Bariatric surgery involves restricting how much food the stomach can hold, usually by means of a gastric band that is placed around the stomach, or a gastric bypass that links the top part of the stomach to the small intestine. Both methods mean the patient does not need to eat so much to feel full, and the gastric bypass reduces the number of calories absorbed from food.

Researchers at Imperial College London (UK) analysed data from the Clinical Practice Research Datalink (CPRD) database, which holds information on over 11 million patients from 674 general practice surgeries in the UK, dating from 1987 to the present. They extracted data on 3,701 patients who had a body mass index (BMI) of 35 kg/m2 or more, who had not suffered a heart attack or stroke when the study started and who had undergone bariatric surgery. They also looked at a control group of 3,701 patients who matched the first group in age, BMI and gender but who had not had bariatric surgery.

They adjusted for factors that could affect the results, such as high levels of cholesterol in the blood, smoking, alcohol and cocaine use, exercise and use of medications, such as statins, beta blockers and hormone replacement therapy. The average (median) age was 36 years in both groups; the average (median) BMI before surgery was 40.5 kg/m2 in the group that had bariatric surgery and 40.3 kg/m2 in the group that did not.

During follow-up, there were 37 fatal or non-fatal heart attacks or strokes in the bariatric surgery group and 93 in the non-surgery group.

“Rates of acute ischaemic stroke were similar across the two groups, though very few events were recorded.”

There was a 60% reduction in new diagnoses of heart failure during follow-up, 22 in the bariatric surgery group and 46 in the control group, and death from any cause was 80% lower among patients who had bariatric surgery compared to those who did not: 45 versus 182 deaths respectively.

Co-author, Peter Collins, Professor of Clinical Cardiology at the National Heart and Lung Institute at Imperial, said: “It’s important to emphasise that this is a retrospective study and can only show there is an association between bariatric surgery and a reduced risk of heart attacks and strokes, not that the surgery causes the reduction in risk. Large, prospective trials are required to show causation. Nonetheless, the difference observed in cardiovascular events is striking, and it indicates that if a causative effect does indeed exist, its size has the potential to be very large and important.

“These findings call for increased awareness and increased uptake of bariatric surgery as a treatment step for patients with obesity who do not achieve significant weight loss on lifestyle and pharmacological therapy alone. This is important, as only a small minority of patients are offered the surgery and, among these, a minority actually undergo it. The rate has been estimated to be as low as 1%.”

Senior author, Mr Sanjay Purkayastha, a senior lecturer at Imperial and also a consultant bariatric surgeon at Imperial College Healthcare NHS Trust, said: “The results of this study, taken together with the wealth of emerging evidence on the benefits of bariatric surgery, not only on weight loss but also on the management and prevention of obesity-related health problems, call for a definitive shift in the perception of bariatric surgery, from what used to be seen as a ‘bonus’ or ‘extra’, almost as an aesthetic procedure undergone by only a minority of the eligible population, to a truly disease-preventing and standard of care procedure that should at least be offered sooner rather than later to eligible patients.

“GPs should consider earlier referral to derive greater benefits in their patients. Especially for patients with type 2 diabetes, as several prospective randomised studies have shown that bariatric surgery is significantly better, currently, compared to best medical management. Similar studies should be designed to further investigate the impact on heart attacks and strokes.”