You are here:
Home / Health News / A closer look at how COVID-19 damages human lungs

A closer look at how COVID-19 damages human lungs 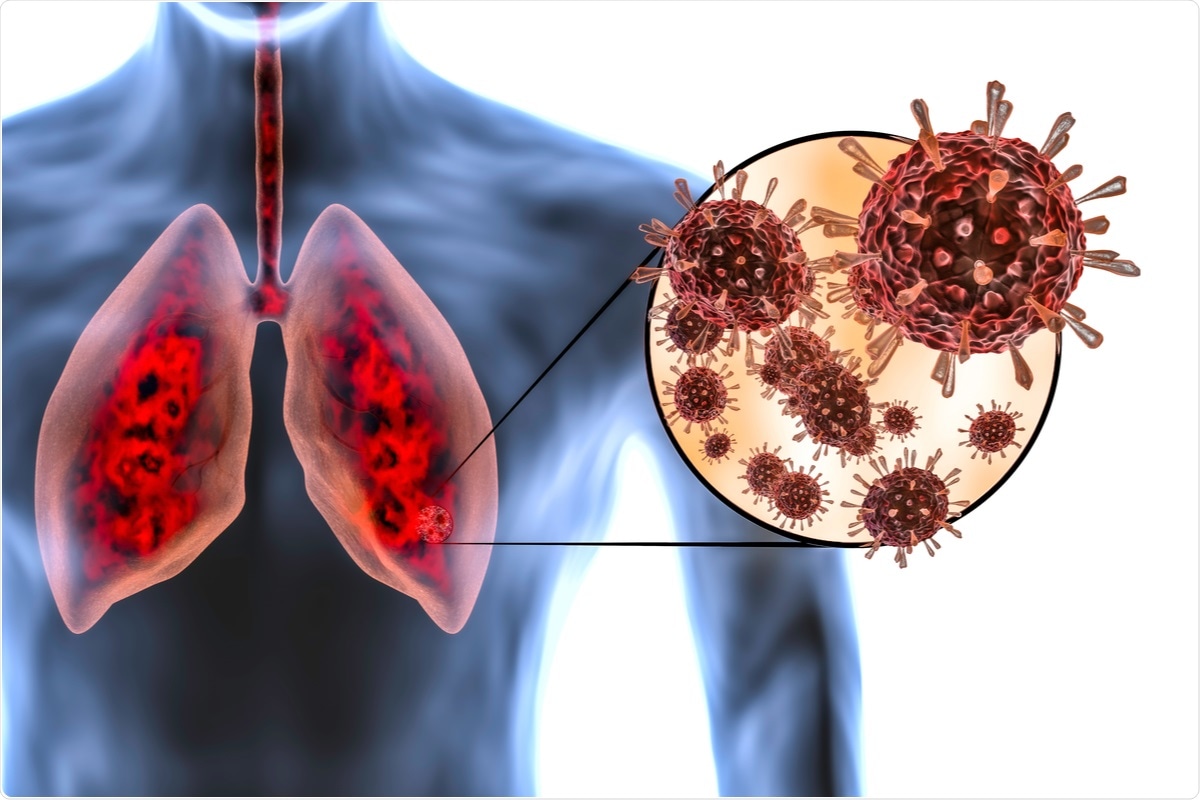 The utility of cryo-EM

Cryo-electron microscopy (cryo-EM) is a high-resolution imaging technology that uses frozen samples, gentle electron beams, and sophisticated imaging software to acquire highly detailed images. The electrons used in cryo-EM, as well as other forms of EM, allow scientists to visualize biological molecules at a much smaller scale as a result of their extremely short wavelength. In fact, it is estimated that the wavelength of electrons is 100,000 times shorter than that of visible light.

In the current study, the researchers emphasize the utility of cryo-EM for analyzing SARs-CoV-2. This technique overcomes many of the challenges that are often associated with studying protein structures through other methods like protein crystallography. Liguo Wang, the scientific operations director of the Brookhaven Lab’s Laboratory for BioMolecular Structure (LBMS) continues, “cryo-EM is particularly useful for studying membrane proteins and dynamic protein complexes…With this technique, we created a [three-dimensional] 3-D map from which we could see how the individual protein components fit together.”

Capturing SARS-CoV-2 at the atomic level

The aim of the current study was to gain a better understanding of how SARS-CoV-2 interacts with proteins once it infects human beings. Previous studies have found that the envelope protein of SARs-CoV-2, which is present on the virus’ outer membrane alongside the spike (S) protein, plays an important role in the assembly of new virus particles within infected cells. This assembly appears to also involve the hijacking of human proteins by SARS-CoV-2 to facilitate its release from cells and transmission to other human beings.

In their work, the researchers constructed a 3D model of the SARS-CoV-2 E protein binding to a human lung-cell junction protein called PALS1. This was achieved by mixing the E protein with PALS1, freezing the sample rapidly, and studying the frozen sample with cryo-EM. In order to construct a 3D image, the scientists used various computational tools and computation infrastructure at their facilities. In the end, the final image of the protein interaction had a resolution of 3.65 Angstroms, which is the size of just a few atoms.

The 3D model allowed the researchers to identify the chain of amino acids that make up the PALS1 protein and how it forms three distinct structural components. Comparatively, the envelope protein of SARS-CoV-2, which has a much smaller chain of amino acids, appears to form a hydrophobic pocket between two of the PALS1 domains. With this 3D map, the researchers provided a much more detailed understanding of what intermolecular forces are involved in the binding of SARS-CoV-2 envelope proteins within the junctions that are present between lung cells.

The disruption of these cell junctions causes immune cells to travel towards the infection site in an effort to eliminate SARS-CoV-2. Once immune cells reach the infected area, cytokines, which are small proteins, are released. This massive inflammatory response is therefore responsible for the ‘cytokine storm’ that is often regarded as a serious complication of SARS-CoV-2, as it increases the chance of acute respiratory distress syndrome. In addition to the damage that this protein interaction causes within the lungs, it can also increase the ability of SARS-CoV-2 to escape the lung and reach other organs like the liver, kidneys, and blood vessels.

Understanding the dynamics of the interaction between the envelope protein of SARS-CoV-2 and the PALS1 protein within human lungs provides important information on how similar coronaviruses evolve. Qun Liu, who was the lead author of the current study, continues, “When the virus protein pulls PALS1 out of the cell junction, it could help the virus spread more easily. That would provide a selective advantage for the virus. Any traits that increase the survival, spread, or release of the virus are likely to be retained.

Aside from understanding the evolutionary development of viruses like SARS-CoV-2, the findings of the current study also provide scientists and researchers around who are looking to develop novel therapeutics against this virus. The development of drugs that are capable of targeting these types of protein interactions would allow scientists to be one step ahead of SARS-CoV-2 mutations before they are allowed to spread.

After completing her Bachelor of Science in Toxicology with two minors in Spanish and Chemistry in 2016, Benedette continued her studies to complete her Master of Science in Toxicology in May of 2018.During graduate school, Benedette investigated the dermatotoxicity of mechlorethamine and bendamustine; two nitrogen mustard alkylating agents that are used in anticancer therapy.